My first job out of college was as a case worker at a gang intervention program in Los Angeles. Clients received social services while they worked at a handful of affiliated businesses, including a restaurant and bakery. This being LA, we frequently had celebrities stop by for a quick bite to support the organization (one time, a client of mine asked Diane Keaton if she recognized her from prison — those were heady times).

But here’s the thing with buying a muffin for a cause. You get the warm and fuzzies of behaving nobly while sidestepping the broader system that necessitates that purchase. And because humans love causation and hate ambiguity, we overemphasize (1) the importance of that single behavior and (2) the potential of that behavior to effect change on a large scale. In other words, it is tempting to consider a muffin purchase as an effective tool for preventing recidivism and that, if only thousands of others would make the same choice, the problem could be meaningfully solved. Meanwhile, the prison-industrial complex continues to drive America’s mass incarceration rate to the highest in the world.

None of this is groundbreaking to you, I’m sure. But we fall into these patterns without even realizing it — especially when it comes to the environment. In his recent article for Salon, environmental anthropologist Peter Sutoris outlines how our focus on shifts in individual behavior (e.g. recycling, using public transportation) — while welcome and useful — can distract from the no-holds-barred, worldwide actions we need to keep our planet habitable. Said another way, we can’t nudge our way out of this one.

Curious what my friends would say, I announced a couple months ago that I had stopped recycling. The response was swift and severe: some were visibly distraught, others insisted on sorting through my trash, and many addressed my break with the social contract. My friends, by the way, aren’t Greenpeace activists: they are upper middle class urban folk who drive SUVs and own Bitcoin. But something about my choice really rankled them.

If I were to guess why, it’d be how much moral stock we’ve placed in these individual behaviors — buying TOMS shoes, recycling our kitchen trash — when necessary, bold actions feel out of reach. As a result, however, Sutoris says we’ve just “replaced one predictable pattern of behavior with another.”

Of course, the idea that personal responsibility can solve global environmental issues didn’t come out of nowhere. It was instilled as part of a system that, like many others, separates wealth and benefits from risk and responsibility. When faced with pushback that plastics were bad for the environment, for example, the oil and gas industry created the false narrative of guilt-free plastic consumption via recycling: it’s up to you, not us, to ensure that these plastics don’t harm the earth. (This is the same reason the food and beverage industry created Keep America Beautiful, to shift responsibility for the proliferation of trash to individuals.)

I’m, of course, recycling again. And I’m heartened by the way in which policymakers are increasing the effectiveness and spreading the burden of that individual behavior. But I’m also determined to join those who expect nothing less than society-changing, unprecedented action. After all, when it comes to saving the world, surely we need more than a nudge.

Mike Reddy is director of advocacy at Marketing for Change.

Learn more about building your team of supporters with our Four Steps to Ally Acquisition resource. 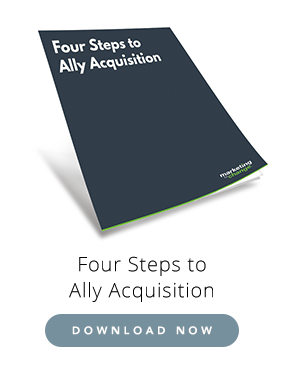