How COVID-19 is Shaping a New Normal for U.S. Parents

Normal is changing, and now, we have a statistical glimpse of what that means for parents. For most, it has meant more frequent family dinners and movie nights. For many, it has meant jumps in discipline and depression. And for one-fifth of American parents, it has meant buying a gun in the last month.

Those are some results from an online survey of 1,519 parents we conducted April 1 to 8 for the IPREX global communication network, results that are painting the first portrait of American parenting in the pandemic.
Even the more expected results (lots more screen time for kids!) are interesting to me in two ways: As a dad, I’m curious how my rules, invented on the fly, differ from my peers. And as someone who influences behavior for a living, I know norms are a powerful tool — one of the most dependable behavioral determinants we have.

So let’s look first at what’s happening. The survey’s results show evidence of sadness and fear, but also glimmers of hope. It’s been a tough month: A third of the parents reported someone in their household losing a job as a result of the coronavirus. But while most parents are imposing strict new restrictions on their children’s movements and many report feeling depressed, most are also experiencing a new sense of togetherness and many are getting outdoors more, exercising more and even recycling more.

One big issue in my suburban neighborhood has been keeping children who normally play together apart. Our own parenting evolved. First we warned against close-talking and wrestling. Then, we told kids who came to the door that no, our kids can’t play with them now. Soon it seemed that nearly all the middle-school and younger kids were mostly, if not only, playing with siblings. But it was hard to know what the norm really was, even in our neighborhood.

Here’s what last week’s results show us: Nearly two out of three parents are barring their children from playing with children who don’t live with them. And almost a third of parents (31%) have gone so far as to limit their children to their own home and yard. That felt good to me: I’m normal! (Yes, few will admit it in a focus group, but we all are influenced by what we perceive are the expected norms).

In the same survey, we also asked parents what rules they thought MOST other parents imposed. And guess what? The perceived norm matched almost precisely the real norm. Perhaps one is causing the other. We know exposing any gap can influence behavior: Binge drinking campaigns on college campuses for years focused successfully on how much more rare heavy drinking was on campus than students expected.

So what else is normal now? Average screen time since the coronavirus hit has jumped 38% — not a huge surprise. But as a can’t-you-play-outdoors-more parent, the actual numbers made me feel more okay about my 13-year-old’s hours of time on video games, at least at first. The teen average for screen time on a Friday was 6.2 hours (more than my kids). Maybe I should ease up. But then I saw the breakdown: gaming was just 1 hour and 45 minutes (I think my kid had more. Darn.). And academics was 1 hours and 10 minutes (my son spent zero time on school last Friday). So suddenly, I’m feeling like I should be stricter.

This is how norms work — they are a way we grade ourselves. One of my favorite manifestations of this is how, in a set of focus groups we did with mothers, no matter how many sugary drinks their child consumed, almost every mom thought their kid drank less sugar than average. This is why campaigns that focus on making a big deal about a problem — kids are getting too much sugar! — backfire to the extent they make the bad thing more normal.

This is also why some post-COVID findings are useful well outside the world of public health. Environmentalism is not getting a lot of press these days, for example, but we might reduce the erosion of environmental behaviors by showing how most parents are sticking to or even increasing how much they recycle, compost and conserve energy, even as they juggle far more family time at home.

It’s also why I have to finish writing this blog so I can go running. Four in ten parents told us they were exercising more, and 37% are spending more time outdoors. (I need to stay competitive with these peers!). In fact, maybe I should get my 13-year-old off that video game and have him run with me. About half the parents say they are going on walks or runs more often with their family.

And while you may or may not be concerned that 22% of parents say they have bought a gun in the last month, it’s probably important to mention that 83% of those parents also talked to their child about gun safety in that same time period (so that’s the expectation).

Of course, there’s also the questions of why and how:

A survey won’t really tell us. That’s why we are convening online interactive focus group studies, following groups of people over a few weeks, and examining how their values, needs-states and priorities are changing in post-COVID America. We’ll learn more as those get into the field.

The New Normal is here, and it’s evolving. We’ll keep you updated as we follow it. In the meantime, you can peek into family life during a pandemic with this topline summary report from the IPREX Parent Normal survey.

Peter Mitchell the chief creative officer and a principal at Marketing for Change. 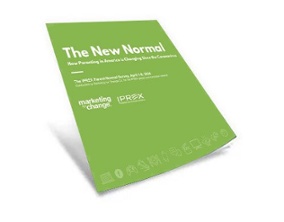